Национальной птицей Израиля провозглашен удод обыкновенный (Upupa epops). Ибо сказано: "And the stork, the heron in its kinds, and the hoopoe, and the bat" (Levit.19)
Фотография из Википедии: 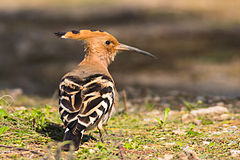 J.R.Simplot: At 14, Jack, by his own account, left home after his father refused to let him attend a basketball game. His mother gave him $20 in gold coins, and he moved into a $1-a-night hotel in a nearby town. There were teachers living in the hotel who were being paid in interest-bearing scrip. Jack bought them at 50 cents on the dollar and sold them to a bank for 90 cents on the dollar.

He used this profit to buy a rifle, an old truck and either 600 or 700 hogs (accounts vary) at $1 a head. He used the rifle to shoot wild horses, which - after stripping the hides for future sale at $2 each - he mixed with potatoes and cooked on sagebrush-fueled flames. The hogs ate the result. When he sold the fattened pigs, Mr. Simplot made more than $7,000.

That gave him capital to buy farm machinery and six horses and become a potato farmer. [...] A $1 million investment in two engineers working in the basement of a dentist's office in Boise made Mr. Simplot the largest shareholder in Micron Technology Inc., a major manufacturer of computer memory chips. [...] In 1977, he and his company each paid $40,000 in penalties for failing to report income to the Internal Revenue Service, and for claiming false deductions.

"You can agree or disagree about the decision to liberate Iraq in 2003, but I would really ask that if you ... believe he was not a threat to the international community, then why in the world were you allowing the Iraqi people to suffer under the terms of oil-for-food." -- Condoleezza Rice. Глубокий вопрос. Не знаю даже, как начать на него отвечать.

Bloomberg Top News -- The toilet works for solid waste; for liquid, the station's crew has rigged a ``urine bypass.'' The astronauts had briefly used the commode on Russia's Soyuz, a spacecraft docked at the station that has limited waste capacity.

The National Aeronautics and Space Administration traced the likely problem to a Russian-built pump. The part failed in both the original toilet and a spare attached in the past week, Shireman said.

A third pump, from a different batch, was delivered from Russia this week and loaded on Discovery, along with part of the Japanese-built Kibo laboratory.
Collapse